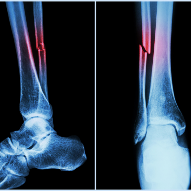 I once had a young female golfer who wanted help regaining range of motion in her ankle. She had just finished physical therapy and was able to walk with a cane.

Her x-rays showed pins and anchors had been placed in both the tibia and fibula. Ankle fractures typically involve the tibia or the fibula, but in this case, my client had a more serious injury involving the medial malleolus and the lateral malleolus.

The injury occurred when her young dog took off suddenly, pulling her in a direction that created a significant force of rotation in the ankle that caused a fracture to both her tibia and the fibula. When both sides are injured, the ankle becomes unstable and surgery is typically required to repair the fracture.

There are three bones that make up the ankle joint. The tibia, also known as the shin bone; the fibular, a smaller lateral bone of the lower leg; and the talus, a small bone that sits between the calcaneous and the tibia and fibula.

The Recovery Process: How Massage Helps

Because there is such a wide range of injuries, people will heal from ankle fractures in a wide range of ways. It takes at least six weeks for the broken bones to heal, but may take longer for the involved ligaments and tendons to heal. In most cases, weight bearing is not allowed for six weeks.

After six weeks, the ankle may be protected by a removable brace as it continues to heal. In my client’s case, the damage was so extensive they had to leave her in the brace for 13 weeks.

Complications from surgery are most commonly encountered during the rehabilitation phase. Stiffness of the ankle joint or recurrent instability are both possible complications.

Massage therapists can help reduce both the stiffness and the instability, and there are three main goals in doing so: 1. Restore the mobility of the joint. 2. Increase the pliability of the restricted soft tissue; 3. Bring back proprioception, which is the unconscious perception of movement and spatial orientation arising from stimuli of the muscle, joints and ligament receptors.

Sample Massage Protocol: My Experience with One Client

Most people will return to normal daily activities, with the exception of sporting activities, within three to four months. The additional problem for sports is other muscles sometimes become weak during the down time, so those must be evaluated and rehabbed as well.

Some studies suggest people can still be recovering up to two years after their ankle fractures, and not walking with a limp or turning their foot outward under bodyweight load can take several months. In this client’s case, she has returned to chipping a golf ball, but not a full swing.

Read More on the Ankle and Massage