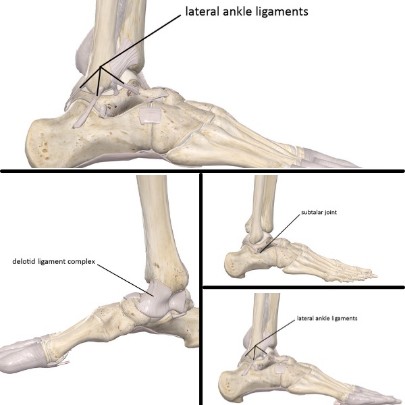 The ankle complex provides a firm base of support for the body while simultaneously helping us adapt to variations in ground surface. Its job is a big one—providing an ideal balance between mobility and stability—and requires numerous bones and joints in both the foot and ankle.

However, there are three primary joints that are crucial for optimum ankle function. They are the distal tibiofibular syndesmosis, talocrural, and subtalar joints. Let’s look at each of these three articulations and how their structure and function interact for optimal ankle performance.

The distal tibiofibular syndesmosis is the lower joint between the tibia and fibula. Unlike many other joints, there is no joint capsule. Instead, fibrous connective tissue binds the talus and fibula close together at this joint.

Syndesmosis sprains are common in sports played on turf with cleated shoes. For example: Let’s suppose an athlete has a cleated shoe that digs into the turf and keeps the ankle relatively immobile. If they fall forward (producing foot dorsiflexion) while attempting to turn to the side (rotational stress in the ankle), injury to the syndesmosis is likely.

The more common medial and lateral ankle sprains are usually not difficult to identify because the injured ligaments are superficial, making their palpation much easier. Palpation of the syndesmosis ligaments is more challenging because they are deep to other soft tissues.

The talocrural joint is the articulation where the distal tibia and fibula articulate with the talus. It is a synovial hinge joint with a joint capsule and supporting ligaments.

The tibia is the weight-bearing bone of the lower legs, so most bodyweight is transmitted from the tibia directly to the talus and into the foot at this joint. The talus has a projection that fits under the curved surface of the distal tibiofibular joint. The primary actions at this joint are dorsiflexion and plantar flexion.

Stability at the talocrural joint is enhanced on both sides by ligaments. On the medial side of the ankle, four ligaments form a fan-shaped pattern collectively referred to as the deltoid ligament. The four ligaments that make up the deltoid ligament group include the anterior tibiotalar, posterior tibiotalar, tibionavicular and tibiocalcaneal, thought they are rarely called by their individual names.

In many synovial joints of the body, the joint capsule adds significant strength to the joint. However, in the ankle, this is not the case. The talocrural joint capsule is not very strong, so medial and lateral ankle ligaments must produce most of the stability.

This kind of injury, where the ligament tears away a fragment of bone with it, is called an avulsion fracture. As noted above, the lateral ankle ligaments are not as strong, and their strength deficit is one crucial factor in the frequency of lateral ankle sprains.

The Subtalar Joint: Range of Motion and Rocking Side to Side

The primary actions at the subtalar joint are a side-to-side rocking motion that produces inversion and eversion of the foot. There is a greater range of motion for inversion than eversion. As noted earlier, the distal portion of the fibula extends farther inferiorly to prevent excessive eversion. This bony arrangement also lends more stability and resistance to forces that would sprain the deltoid ligament, further enhancing its strength.

While the ankle’s ligaments are responsible for producing most of the stability around the ankle, we should not ignore the stabilizing role of the muscles that cross these joints. We usually think of the muscles as creating movement at the joints, but they also play an essential role in aiding stability. For example, the weaker lateral ankle ligaments benefit from additional stabilization provided by the fibularis (peroneal) muscles.

The foot and ankle complex is a masterful design of form and function that allows us to walk around on two feet while maintaining balance and adapting to all kinds of alterations in ground surface. As a massage therapist, greater respect for the complexity of these joint regions helps us better understand the role of the soft tissues in various pain and injury complaints at the ankle.

The crucial importance of client assessment