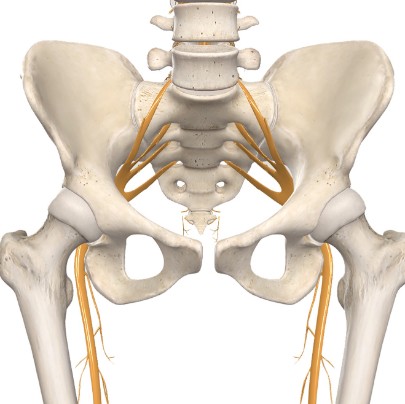 Q+A with Whitney Lowe: Can Massage Therapy Help Those Diagnosed with Sciatica?

Q+A with Whitney Lowe: Can Massage Therapy Help Those Diagnosed with Sciatica?

Sciatica is a common diagnosis for people whop experience low back pain that may also radiate down the lower extremity. One of the challenges in determining if you should work on a client with this diagnosis is that the term, sciatica (and its corresponding diagnosis), is ambiguous and can describe several problems that may or may not involve the sciatic nerve.

Let’s look at some of these potential problems that often fall under the umbrella of sciatica, and explore if massage would be appropriate in those situations.

Cause of Sciatica: When the Sciatic Nerve is to Blame

The sciatic nerve is composed of nerve roots that begin in the lower lumbar and sacral plexuses. The fibers from these nerve roots blend together and produce the large sciatic nerve. Nerve roots may be compressed in the lumbar region from conditions such as herniated discs, spinal tumors, bone spurs, or other obstructions. When these obstructions press on nerve roots, they may produce pain sensations locally in the lumbosacral region, or extending down the entire length of the posterior lower extremity.

Pressure on nerve roots from obstructions in the lumbar region is often referred to as true sciatica. Generally speaking, a more accurate description of these conditions would be nerve root compression pathologies, especially when the term sciatica is so ambiguous.

The cause of sacroiliac joint dysfunction is usually quite different from factors involved in sciatic nerve compression. The sacroiliac joint is unlike numerous other joints in the body in that there isn’t a smooth and congruent surface between the two articulating bones.

Instead, there are rough and uneven surfaces on each side that are designed to interlock with each other like connecting puzzle pieces. If the two bones get out of alignment, those ridges and depressions no longer line up correctly and produce significant irritation of the articulating surfaces that can lead to sacroiliac joint pain.

That pain is commonly in the lumbosacral region but can also refer down the leg and be mistaken for sciatic nerve pathology.

Compression of the nerve in this region can produce sensations identical to those from compression in nerve root pathologies, and can make discriminating between these two regions when trying to identify the primary location of sciatic nerve compression difficult.

Other Causes of Sciatictype Symptoms

Massage Therapists Want to Know: When Should I Work on a Client with Sciatica

The ultimate question most massage therapists grapple with is whether or not it is appropriate to work on somebody with the symptoms mentioned above.

Massage can be helpful for these problems, but there are some common guidelines you should consider:

Back Off on Pressure. Generally, you should not use any technique that puts additional pressure on the sciatic nerve or its associated nerve roots.

When massage therapists work with tight muscles, applying pressure with various massage techniques can decrease discomfort and improve pliability in those tissues.

This same idea does not hold true with nerve tissue, and massage therapists don’t want to do anything that puts further compression or tension on any of the affected neural structures, as doing so will likely aggravate the existing symptoms, which could in turn further aggravate an existing neurological problem.

Communicate with Clients. Because there are a number of techniques and advanced approaches massage therapists can use for low back pain and sciatica in conjunction with soft tissue work—like nerve flossing and neural mobilization—having conversations with your clients where you emphasize the ambiguity in the general term sciatica, as well as your need to more precisely understand the origin of their pain, can be very helpful.