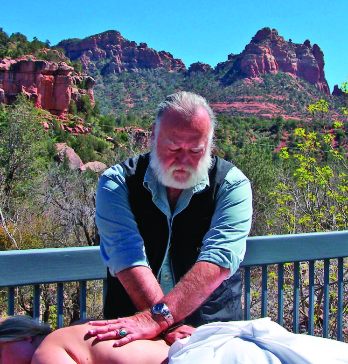 What do I mean by this? All forms of massage, bodywork, energy work, and therapy have been too quick. The art of Myofascial Release is finding the individual’s barrier, which are different and unique to every other human being on the earth. In other words, there are over 7 billion people on earth, 7 billion distinct fascial strain patters. This is the art of Myofascial Release, and then when we find the barrier, it is imperative to wait at this barrier without sliding or forcing for a sustained period of time to elicit a series of phenomena that are essential for authentic healing that I will discuss further in this article. For over fifty years, I have been a therapist. As I gained experience with the myofascial system, I found that it responded quite differently from what the earlier research on fascia seemed to show. That research was performed on cadavers, suggested that you couldn’t release the three-dimensional web of fascia. I agree that the normal boundaries of the fascial system cannot be altered except surgically, or from the enormous force of trauma. What earlier research overlooked was the importance of the ground substance, the gel-like extracellular material in which the cells and fibers of connective tissue are embedded. When exposed to trauma, the ground substance tends to lose its fluidity, and solidifies. I equate it to pouring glue or cement into the interstitial spaces. It is this dehydration of the tissue, with the accompanying development of cross-links at the nodal points that can put enormous and excessive pressure on pain sensitive structures and limit the fascial system’s ability to glide. This enormous pressure, approximately 2,000 pounds per square inch, can produce symptoms of pain, including headaches, fibromyalgia, and limited motion. Interestingly enough, myofascial restrictions do not show up in any of the standard tests (X-rays, CAT scans, myelograms, and electromyograms), so myofascial restrictions are being completely missed and/or misdiagnosed. Myofascial Release is an important dimension to massage and bodywork that helps to create more long-lasting results. While massage, energy techniques, and other forms of bodywork address fascia, they release only 20 percent of the facial system—the elastic and muscular components of the myofascial complex. It requires very different principles to release the other 80 percent. When addressing fascia, you must first engage the collagenous barrier, something that takes up to 120 seconds of pressure to even begin a release. Most therapists are either attempting to push their way through it or pushing over it; they don’t wait to be allowed through it. The other side of that barrier is where myofascial release happens. In addition to waiting on the tissue, and, in effect, being “invited in,” Myofascial Release is also reliant on applying the proper pressures. Too much pressure and the client’s subconscious mind takes over and starts a guarding process. In other words, trying to force a system that cannot be forced. Too light a touch, and the barrier is not being engaged. Myofascial Release is about ‘feeling’ into the client’s body and reading their body language. Once engaged with the collagenous barrier there is another 3–5-minute window where you illicit the piezoelectric phenomena. As I said previously, everything we that have learned as logical as it may have seemed, was too quick to elicit the following the phenomena we area about to explore. Somewhere around the 5 minute period, there is a number of phenomenon that occur that do not occur with other forms of massage, bodywork and energy work that leads us into what I consider to be authentic healing.

Around 5 minutes, you start to elicit the piezoelectric effect. Piezoelectricity is a Greek word for pressure electricity. It’s a well-known fact that our cells have a crystalline nature and when you apply pressure into a crystal it generates electrical flow. In our body it’s a bioelectrical flow, which is another way of describing the motion of the mind. We call that unwinding.

Phase Transition We then move into phase transition, which is the phenomenon where ice transforms into water. In the body is not ice, but after trauma, the ground substance, which should be fluid, starts to solidify and turns into crushing pressure on pain sensitive structures that produce the symptoms that our clients come to us for help. You might be interested in looking into the work of Dr. Gerald Pollock, one of the world’s experts on fluid dynamics and has a new book called the “Fourth Phase of Water”. You and I have been brought up to believe there are three phases of water: ice, water and vapor. Now it has been discovered there is a 4th phase. It is the fluid in the cell and the ground substance of the fascia that is actually a liquid crystal capable of change. There is a chaotic period as one moves into the phase transition that allows for change, growth and healing, so that which has solidified can become more fluid. This allows tissue to glide again and take the horrendous pressure off of pain sensitive structures which fascia restrictions can produce.

Resonance When a therapist touches another person originally the vibratory rates are quite different. Eventually the sustained pressure allows the vibratory rates between the two to match identically. That’s called resonance which is another word for release. This is when 2,000 pounds of pressure is taken off of pain sensitive structures and the rehydrated tissue becomes capable of glide. Many forms of massage and body work are great, however none of them sustain pressure long enough, so it’s important to combine Myofascial Release with massage, body work, energy work, etc. for maximum effectiveness. As you couple Myofascial Release with your area of expertise it becomes the ‘missing link’ that can enhance everything that you do!