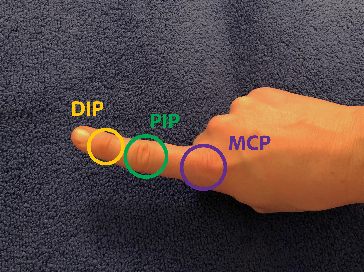 Hand Anatomy 101: The Three Major Joints in Your Fingers

Hand Anatomy 101: The Three Major Joints in Your Fingers

To view the images accompanying this article, please visit our Facebook album here!

Each of the four fingers on your hands has three joints. When these joints are injured or inflamed, doing detailed work with the fingers and fingertips becomes very difficult.

Understanding hand anatomy and the way the joints in your fingers move can help you protect against injury.

The middle joint of the finger is called the proximal interphalangeal joint, or PIP for short. This joint can bend into flexion more than any other joint in the finger—more than 90 degrees in most people. The PIP joint, however, has almost no ability to move into extension. If extension is forced, serious injury can result. The only exceptions to this general rule are individuals who are genetically hypermobile.

The most distal joint, nearest to the tip of your finger, is called the distal interphalangeal joint, or DIP for short. These joints allow for fine motor control, and in most people can flex about 45 or 50 degrees, and more for some when the finger is fully bent. The DIP joint can also extend or bend backwards anywhere from 10 to 25 degrees.

See Also: 6 Assessment Tests for the Joints of the Fingers

The most proximal finger joints are called the metacarpophalangeal joints, or MCP for short. Normal range of motion for these joints should be 90 degrees in both flexion and extension, sometimes a bit more. “Normal” range, however, is often decided by who anatomy and medical experts consider an “average” person. Since average people don’t necessarily have healthy joints, most people don’t have full range of motion in their MCP joints. This limitation of movement can be caused by injury or calcification of the joint.

Collateral Ligaments of the Fingers

The DIP and PIP joints of the finger have two collateral ligaments, each holding them together. One is on the medial side and one is on the lateral side, and their function is to limit lateral motion and keep the joint in alignment so that it moves like a hinge joint in flexion and extension. When ligaments in the body are loose and there is too much play in the joint, injury is more likely.