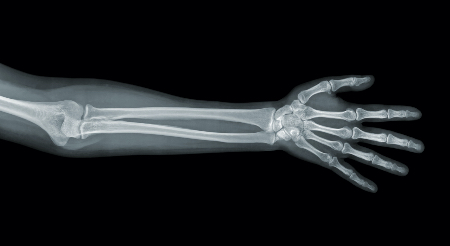 The supinator muscle is responsible for just one motion; as its name suggests, it supinates the forearm—turning the hand palm up. In right-handed people, supination is the action used to tighten a screw and in left-handed people this muscle is used to loosen a screw; repeated use of a hand-driven screwdriver can easily strain this muscle. Other possible causes of strain include repetitive sewing or stirring actions, as well as the stabilizing actions of the supinator in golf and all racket sports.

The supinator originates from the lateral epicondyle of the humerus, where it shares a common tendon with the extensor carpi radialis brevis and extensor carpi ulnaris, as well as from the radial collateral ligament of the elbow, the annular ligament of the radius, and a ridge on the ulna called the supinator crest. From there, the muscle curves around the upper third of the radius and then inserts on the lateral and anterior surface of that bone.

The test for the supinator is resisted supination. When the supinator is injured, this test causes pain at the lateral elbow, sometimes moving into the forearm. With the client standing, have the person bend the elbow at 90 degrees, with the palm facing the floor. Now lace your fingers and grasp around the wrist. Now ask the client to attempt to rotate the forearm toward the ceiling. As they try to turn their arm you apply an equal and opposite force so that they cannot move at all. If you want to take the biceps out of the picture try the same test with the clients arm extended. This extended position weakens the strength and mechanical advantage of the biceps.

The supinator can be injured at the common extensor tendon attachment at the lateral epicondyle of the humerus. If that is the case and it is painful on the test and also on palpation at the lateral epicondyle then apply the same treatment I described for tennis elbow. Alternatively, it can be injured at its attachment at the upper third of the radius. To friction that attachment, place your fingers at the radius just distal to the elbow, at the precise location where the client is experiencing pain. Then, using your thumb at a counterbalance for your pressure, apply friction along the radial attachment with a superior-to-inferior motion.

Once the client is feeling a bit better have them begin a series of supination exercises with a one sided weight. Three sets of 10 reps starting at about one pound and building up to 8 or 10.  In the photo you see a special weight called, the Premium Forearm Exerciser. This one sided weight is good for many injuries. The closer you get to the weight the lighter it is, and the farther away the heavier it is.