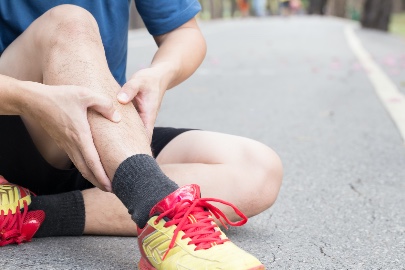 Anterior shin splints are attributed to overuse of the dorsiflexor muscles, such as the tibialis anterior, extensor digitorum longus and extensor hallucis longus. Overuse results from excessive eccentric loading on the dorsiflexors. An example is walking or running downhill. With anterior shin splints, the client reports a history of repetitive activity performed on a regular basis or a sudden increase in activity levels. Pain is felt in the anterior lateral region of the leg near the proximal tibialis anterior attachment. The client with shin splints routinely reports pain at the beginning of an activity that gradually subsides with use, only to return after activity has ceased. The pain is like delayed onset muscle soreness by coming on hours later, even at rest.1

Anterior compartment syndrome sometimes occurs as an acute injury from a direct blow to the lower leg. However, it's more commonly a chronic condition resulting from overuse, such as running on a hard surface or suddenly changing the intensity of training. The condition often is referred to as exertional compartment syndrome (ECS) if it results from changes in training intensity.

Muscles of the extremities performing similar functions are enclosed within fascial compartments separating them from other muscles. Repetitive overuse of these muscles causes these tissues to swell, increasing compartmental pressure. Subsequently, the deep peroneal nerve and tibial artery or vein are squeezed within the compartment. Ceasing the offending activity allows symptoms to subside immediately. Anterior compartment syndrome and shin splints frequently are confused because symptoms are felt in the same region of the lower leg.2

Clients with exertional compartment syndrome will describe a repetitive activity performed on a regular basis. The client also might report a sudden increase in activity levels preceding the onset of symptoms. For example, chronic compartment syndromes often develop in military recruits when they begin basic training and their activity levels are drastically increased.3 Symptoms might include aching lower leg pain, paresthesia, coldness in the feet, color changes in the distal lower extremity, or motor impairment to the dorsiflexor muscles, in more extreme cases. The more pressure within the compartment, the worse the symptoms will be.

With a compartment syndrome, symptoms increase as the client engages in the aggravating activity. Once the activity is ceased, symptoms generally subside within about 30 minutes as compartmental pressure returns to normal. The reduction of symptoms when activity is ceased is one way to distinguish compartment syndrome from shin splints. Although there might be some initial soreness, shin splint pain characteristically increases after the activity with delayed onset soreness.

Compartment syndromes usually produce pain with palpation only if the compartmental pressure is elevated, such as right after the activity, while shin splints likely are to be tender to palpation long after activity has ceased. Shin splints produce pain with stretching and manual resistance (resisted dorsiflexion). Compartment syndrome is not as likely to be painful with either manual resistance or stretching because neither of these maneuvers increases the intracompartmental pressure. If paresthesia is present, compartment syndrome should be suspected because this is a symptom of nerve involvement and there is no nerve pathology in shin splints.

Both conditions affect the same region of the body and result from similar patterns of overuse. However, it's crucial to make a distinction between the conditions because treatment strategies for each differ. The only way to accurately identify the crucial differences between these similar conditions is with a comprehensive and thorough examination process.