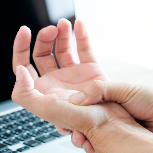 Voices from the Profession

Upper extremity nerve compression problems are an occupational challenge that can cause pain and limit function, and that’s why understanding these issues is essential. The most common upper extremity nerve entrapment is carpal tunnel syndrome, a condition that is often suspected when neurological symptoms arise in the hand. Nerve compression of the ulnar nerve, however, also occurs and affects more people than many realize.

The Anatomy of Nerve Compression

Most commonly, cubital tunnel syndrome develops over time from low to moderate levels of nerve compression. There may be fibrous bands within the FCU muscle that compress the nerve, or the compression could result from particular positions. Any position or activity that keeps the elbow flexed for extended periods could lead to nerve compression symptoms.

Cubital tunnel syndrome is common in occupations like cosmetologists, draftspersons and graphic artists. The condition may also occur from a direct blow to the posterior elbow, although this is not as common. You may recognize this feeling after sleeping on your arm and waking up with some numbness in the ulner aspect of your hand, caused by your arm being flexed and compressing the ulner nerve in the cubital tunnel.

Unlike carpal tunnel syndrome, where nerve compression results from pressure generated within the tunnel due to tendon swelling, the nerve compression present in Guyon’s canal syndrome originates outside the tunnel. Guyon’s canal syndrome may occur as either an acute or chronic compression neuropathy. Acute injuries occur most often with a direct blow to the base of the hand while the wrist is hyperextended. The most common example is the Fall on an Outstretched Hand (FOOSH) injury.

Chronic compression injuries occur from pressure maintained on the base of the hand for long periods. A typical example is long-distance cycling, where weight is placed on the base of the palm and the wrist is held in hyperextension for extended periods. In the cycling community, Guyon’s canal syndrome is referred to as handlebar palsy. People who rely on walkers or canes can experience the chronic form, too.

Weakness in muscles supplied by the ulnar nerve can also occur in both cubital tunnel syndrome and Guyon’s canal syndrome. When there is motor involvement, the client may report difficulty holding objects in their hand or clumsiness when performing precision activities, like writing.

Palpation is helpful for identifying both conditions. Because the region of entrapment is superficial in both pathologies, palpating the involved area may increase symptoms. If manual pressure directly over the cubital tunnel reproduces the primary complaint, then cubital tunnel syndrome is likely. Similarly, if pressure directly over Guyon’s canal reproduces the complaint, Guyon’s canal syndrome is implicated. Keep in mind that both locations could be involved at the same time, and massage therapy strategies should address both locations for thoroughness.

Additionally, the neurological symptoms of both are likely to be reproduced with certain upper extremity motions. If cubital tunnel syndrome is the primary problem, neurological sensations are reproduced passively or actively with elbow flexion. Often, the symptoms are not aggravated by simply moving the elbow into a flexed position. Instead, the elbow must be held in the flexed position for some time before symptoms recur.

Strategies for Pain Relief: How Massage Can Help

Medical treatment of both conditions emphasizes conservative approaches, including rest from offending activities and splints to reduce aggravation of the nerve. Splints are especially helpful at night during sleep when the wrist or elbow may be held in detrimental positions (wrist hyperextension or elbow flexion) for long periods.

Because Guyon’s canal syndrome is caused by external compression, reducing the external compressive force is usually sufficient treatment, although healing may be slow. In cubital tunnel syndrome, surgery may be necessary if conservative treatment is ineffective.

Massage therapists should avoid any techniques that cause further nerve compression, evident by an immediate increase in symptoms. In Guyon’s canal syndrome, there is no prominent role for massage therapy because most massage techniques would incorporate some degree of compression over the canal, which could irritate symptoms. Massage of the entire upper extremity, however, can certainly help reduce the detrimental effects of distal neural compression, so working the entire upper extremity and being careful about any symptom increases is a helpful approach.

Cubital tunnel syndrome, on the other hand, is a condition in which compression frequently occurs from muscular factors, so massage is more likely to be helpful in this case. Because the flexor carpi ulnaris is the primary problem, techniques that reduce tension in the flexor muscles of the forearm are most important. Be cautious when performing any massage techniques over the tunnel so that further ulnar nerve compression (aggravation of symptoms) does not occur.