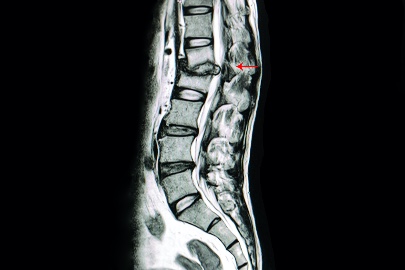 Disc herniations are sometimes blamed for back pain when they are not actually the cause. It is important to understand the anatomy and symptoms of disc herniation to make proper clinical decisions. Massage can be an effective adjunct treatment for clients with this condition.

When x-ray technology first emerged that could show herniations of the lumbar intervertebral discs, there was a rush to assign blame for low back pain on the bulging intervertebral disc, which clearly appeared to be protruding towards nerve roots. For decades it was assumed that if a person had back pain it was from a lumbar disc herniation. Sadly, this led to an excessive number of – and in many cases unnecessary - surgeries. Soft-tissue treatments are now proving to be quite effective at helping in pain relief for this condition.

The following is a more detailed look at the structure of the intervertebral disc and what occurs in pathological herniations in the lumbar region.

Anatomy Of The Disc

Intervertebral discs are made of a dense fibrocartilage. There are two component parts to the disc: the inner gel-like substance called the nucleus pulposus and the denser layered fibrocartilage on the outer rim called the annulus fibrosis (Figure 1). Compressive loads applied to the intervertebral disc cause the inner nucleus to push against the annulus fibrosis. With continued pressure over time, the annulus loses its structural integrity and breaks down causing the disc to change shape.

There is various terminology used to describe the change in the disc's shape as it is impacted with chronic compressive loads such as protruding, herniated, prolapsed, bulging, or ruptured disc. Also frequently heard is the misnomer, slipped disc, which is technically misleading because the disc has not slipped anywhere, it has just changed shape. An effort has been made to update the terminology so it is consistent with the differing levels of severity of the disc herniation. The terms shown in Figure 3 reflect the types and severity of disc herniation and are preferable for describing disc herniation.

The most common signs and symptoms of disc herniation involve sensory or motor impairments. Sensory symptoms include sharp, shooting, electrical-type pain sensations, as well as paresthesia (pins and needles) or numbness. Motor impairments are evident with either muscle weakness or atrophy. Lumbar nerve roots feed the nerves of the lower extremities, so symptoms from lumbar disc herniation are generally felt in the lower extremity, although pain may be felt in the back as well.

The region of the lower extremity where the impairments are present helps indicate the corresponding affected nerve root. For example, in the upper lumbar region the nerve roots primarily feed into the femoral nerve and therefore symptoms are generally felt in the anterior thigh region. If the disc herniation is in the lower lumbar region, symptoms will generally be felt down the posterior side of the leg because these nerve roots feed the sciatic nerve. Other nerve compression pathologies can produce symptoms similar to disc pressure on a nerve root. Assessment will help determine crucial information about where the nerve compression is originating.

A key question for massage therapists is whether or not it is appropriate to work on somebody with a herniated disc. Massage therapy can be a valuable means of helping to reduce the aggravating factors that perpetuate lumbar disc herniation and the subsequent pain and dysfunction that result. As with other potentially serious medical conditions, it is a good idea to obtain a doctor's clearance before treating the client.

A common concern expressed by massage therapists is whether or not working in the lumbar region will press the protruding disc against the adjacent nerve roots. Note that in Figure 4 we see the relationship between the lumbar muscular structures, the transverse processes of lumbar vertebra and the nerve roots. The transverse processes prevent direct pressure on the nerve root. While the specific massage techniques will not directly compress the disc against the nerve roots, it is possible to aggravate pain from a disc herniation with massage in the lumbar region indirectly by moving the vertebral bodies.

Because the disc does not always protrude in the same direction in relation to the nerve root there is no way to know for sure which motions or positions will aggravate nerve root compression. A good general rule of thumb is that if any motion or position or technique further aggravates the client's symptoms, it should be immediately stopped. However, relieving muscular tension in the lumbar region is an important step to reducing disc compression.

Because herniated discs are more common than once thought, it is likely you have had clients with this condition. In general you should consider it relatively safe to work on clients who have disc herniation. A standard rule of caution should be that anything that further aggravates the client's neurological symptoms should be immediately stopped. As usual, if it is at all possible to get further clarification of the exact nature of the problem from a physician you should definitely try to do that. Massage therapy can be a valuable adjunct treatment for clients with disc herniations, so the more you know about this condition the more effective relief you can provide your clients.